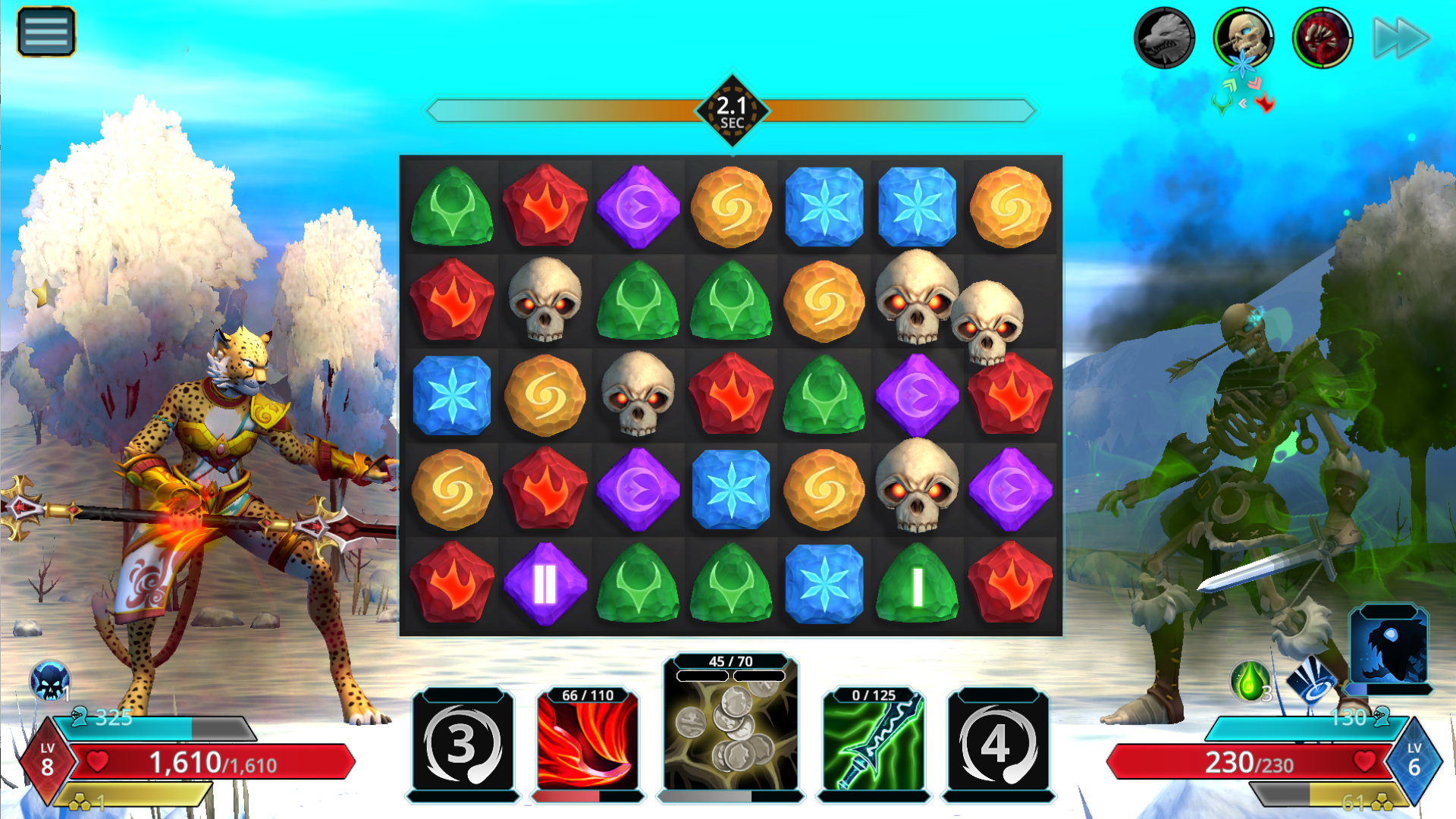 Since our Puzzle Quest 3 worldwide launch earlier this year, the world of Etheria has seen many new changes in the 3rd installment of the Puzzle Quest franchise. As we continue to work tirelessly to optimize the game with new features and content, we thought it would be fun to have a look back at how the Puzzle Quest game mechanics have evolved throughout the years.

Throughout the development of Puzzle Quest 3, we made a few changes and improvements to various mechanics. Besides updating the 2D art style of Puzzle Quest to a 3D one, a key thing veteran players of the series will notice is that you’ll be able to match gems in a diagonal manner in Puzzle Quest 3.

This adds an extra element to the horizontal and vertical matching pattern that wasn’t in previous Puzzle Quest games. This diagonal movement opens the board to allow more matching options to employ different strategies to win the battle.

Other notable changes made in Puzzle Quest 3 compared to prior installments are the introduction of a turn-timer and the player keeping control of the board – i.e. you, the player, make all of the moves instead of switching between the enemy’s turns, giving you greater control over the gem board. As the timer doesn’t start until you match some gems, you can plan out your moves and make multiple matches in a single turn! Doing this well can result in matching an entire row horizontally with the same Gem type stunning the enemy for 1 turn, which makes them unable to attack or use any of their abilities. It can also lead to getting 8 matches in a single turn giving a “Heroic Effort” buff to your hero, which increases their power for a short time allowing them to deal higher amounts of damage. Together, these elements speed up the game, while allowing skilled players to really shine.

The addition of the timer doesn’t just give the player control of the board, it allows them the opportunity to start the battle when they wish. Giving them the opportunity to take stock of the confrontation and learn about the foe they are fighting. They’ll be able to see the abilities of the enemy to see what power they possess, along with being able to look at their strengths and weaknesses so the battle can be won effectively with the right strategy.

A returning feature is the use of spells, which players can cast to deal damage directly to the enemy and alter the gem board in their favor, this is important to help turn the tide of battle in your favor if things look tight.

A slight change has also been made to the mana system in Puzzle Quest 3. In the original Puzzle Quest, all mana was pooled, and you could choose which Spells you spent your Mana on to cast. In Puzzle Quest 3, players still collect mana by matching gems on the board, but the Mana is added directly to the Spells themselves. The mana you collect is based on the elemental mastery of the hero class you have chosen to play and the elemental attributes of the gear you have equipped.

Having the right gear equipped, that is aligned with a chosen hero’s elemental strengths, is important as it increases their overall elemental masteries. This makes them stronger and more durable in battle. Making it even easier to dispatch weaker enemies, while aiding in the ability to survive those challenging encounters and giving you more time to deliver that killing blow. There are plenty of gear options to choose from and combine to make the hero truly your own as you play through Puzzle Quest 3. We’ll go into more about gear in our upcoming gear system blog, so make sure to check back!

There you have it! Just a glimpse at the many changes made in Puzzle Quest 3 and a little glimpse into the kinds of things you can expect in the next chapter of the Puzzle Quest series. But not all has been changed in the series. You can still expect the same exciting story and challenging combat that made the prior installments so great!

With so many different combinations of Hero Classes, Gear, Spells and elemental masteries, as well as a variety of different game modes with more features and content to come, Puzzle Quest 3 is a game that can be enjoyed well into the future by anyone joining the fight for Etheria!

Now, are you ready for the journey ahead to save Etheria from its latest threat?

Be sure to pick your class and ready your spells as your next adventure awaits you in Puzzle Quest 3!

Stay up to date by joining the Puzzle Quest 3 community!