It’s Sirrian here, AKA Steve Fawkner, and I just wanted to write a short foreword to this dev blog to give it a little context.

For many years, going back through Puzzle Quest, Battlecry, and the original Warlords games, we’ve been sharing the stories of Etheria with you all. These stories have grown from RPG games I’ve run in my world of Etheria for over three decades now.

But with Puzzle Quest 3, my motivation has been to craft “my first real RPG story” – one that felt more ambitious than what we’d done before. A story that would give players a feeling they might have once before when they first played an RPG and really connected with the characters. To help with that, I conscripted Ella, AKA Salty, and I must say it’s been a pleasure co-writing a story with somebody who sees things differently to me. It makes both of our work stronger.

Ahoy, adventurers! It’s Salty, AKA Ella, AKA your Communications Manager turned Narrative Designer, and I’m here to talk about the narrative design behind Puzzle Quest 3.

Steve had a rough outline of the story and a list of the characters that would become our Followers in-game. We fleshed out these characters during the planning process, giving them quirks, motivations, and backstories before moving onto the overall narrative structure. It was decided that the base game would contain 15 chapters, each taking place in a new location with a Follower joining along the way.

From there, we prepared internal documentation which detailed the emotional beats that would occur throughout each chapter, how the characters would grow, and the outcome of their actions on the world and overall storyline. By breaking this down, it became easier to understand why our heroes were on their quest and where we could build tension in the narrative.

After our planning process was complete, it was time to start writing. Our goal was to ensure that the cast of characters fit our natural tone, one that is upbeat, sarcastic, and cheeky.  When the drafts were finished, it was time to move onto a lengthy editing process.

The design team worked on how the game’s narrative would be presented, and then we had to decide how long each conversation could be, with line limits and other boundaries put in place. These rules are broken during crucial scenes, but having the guide in place led us into our first round of editing to better understand what we needed. Around this time, we sent the narrative to 505 Games for review, and they offered their thoughts and opinions that would further improve the story.

After the rough draft, we had to embark on a full rewrite. Following the first full edit of the script, we reviewed the narrative again and made additional changes as needed. During this process, the writing was put into our game engine, and the files were gameready(ish). 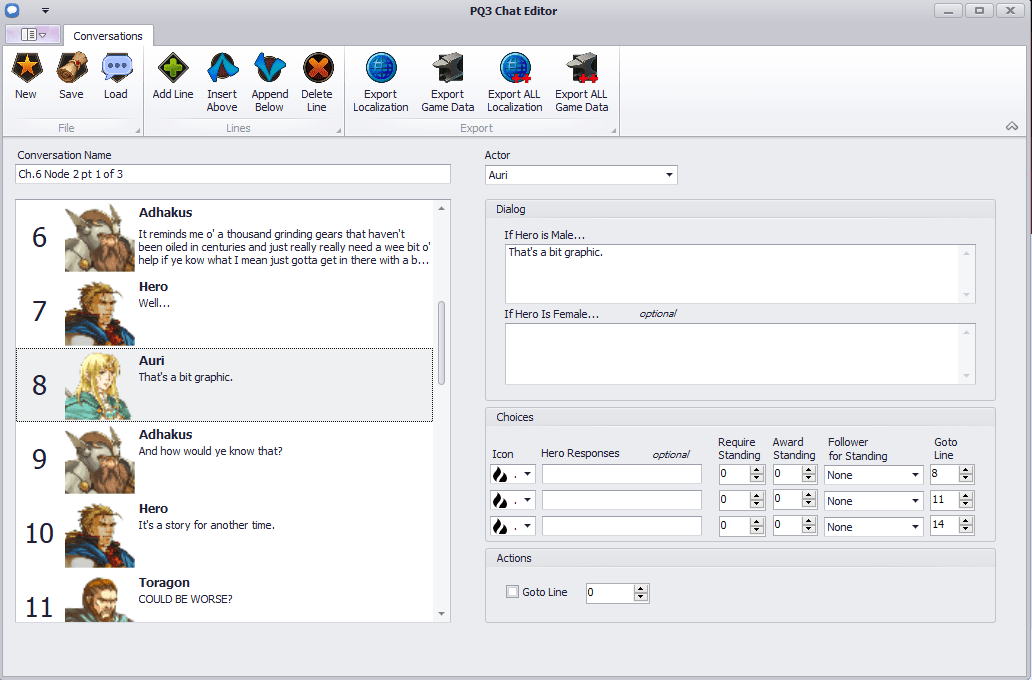 (Before we had our character art finalised, this is what our in-game tool looked like. We used the Hero portraits from Puzzle Quest 1 as placeholders!)

While our work was nearing its end, we weren’t quite finished yet! The next steps included localising the story into other languages, and we liaised with the translation team to ensure the story was as close to our intentions as possible. They also cleaned up a bunch of typos, a harsh reality of writing to a deadline.

Puzzle Quest 3 is releasing with the core 15 chapters completed, with more to come in the future! We are excited to continue writing the adventures of our heroes (and yours!) for years to come.

All that’s left is for players to jump in and experience the story for themselves at the worldwide launch. We can’t wait to  see how you react to the choices and sacrifices our heroes must make as you return to the world of Etheria.

Over time, our developers will be writing blogs that explore different parts of Puzzle Quest 3.