We previously dug into the development process of how Infinity Plus Two evolved Puzzle Quest RPG gameplay with the 5 playable classes in Puzzle Quest 3. Today we do a deeper dive into one of the game’s most stalwart defenders and holy warriors, the Paladin.

Paladins hail from the Agarian kingdom of Siria. Their auras of defensive magic protect them in battle making them perfect for players who like to tackle battles slow and steady. By reducing incoming damage from opponents, they are difficult to defeat but must choose when to strike or counter-attack wisely in order to balance their rigor.

In Puzzle Quest 3 each class has two specific elemental strengths called masteries. A Paladin’s primary mastery is Light and their secondary mastery is Fire. Having these masteries at higher levels gives your spells more power. Stacking extra Light and Fire spells into your loadout can increase those masteries and your damage output even more! 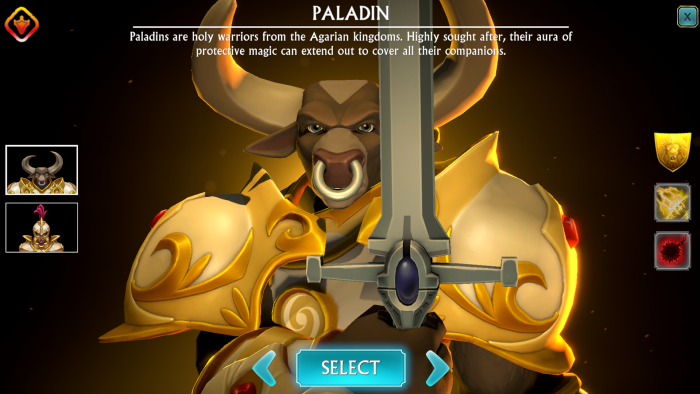 When starting with any class in Puzzle Quest 3, you’ll be given three different starting spells that highlight the specialties of your selected class. Two normal spells and one Ultimate Spell will be found in your spell book.

The Paladin specializes in mitigating damage and then counter-attacking with spells so you’ll see below how those traits are reflected below.

Smite deals direct damage to your opponent while at the same time creating yellow gems on the board. This latter part of the spell is very helpful for the next of the Paladin’s starting magical abilities, Purge.

Purge is a lighter damage spell that amplifies its damage based on the yellow gems in play. It can also destroy gems, allowing you to power up other spells you might have equipped.

That wraps up our primer for what you can expect when playing the Paladin class, but of course, there are many more spells (21 for each class) you can find on your travels – some of which will activate special effects if Shield Gems are in play.  The Paladin is a very engaging class with lots of spell synergies to uncover and exploit.

Will you take up the mantle of this holy warrior?

Harness the power of light and save Etheria from the encroaching darkness? Be sure to don your armor and ready your sword as your story awaits you in Puzzle Quest 3!