In our last class blog entry, we introduced the Paladin, the first of five playable classes in Puzzle Quest 3. In this installment, we’ll be taking an in-depth look into the game’s most feared frontline warrior, the Berserker.

Beyond the northern borders of Theira lie the wild and dangerous Plains of Ar. Here, only the strongest and fiercest creatures can survive amidst the wind-scoured rocks and harsh storms. So, it’s no surprise that the Clans of Ar count many Dwarves and Minotaurs amongst their finest warriors.

These Berserkers, as they are often known, can harness the power of rage to deal more damage in battle, making them perfect for players who want to approach battles at a fast pace. Their high increase in damage controls the pace of battle, overwhelming their foes. 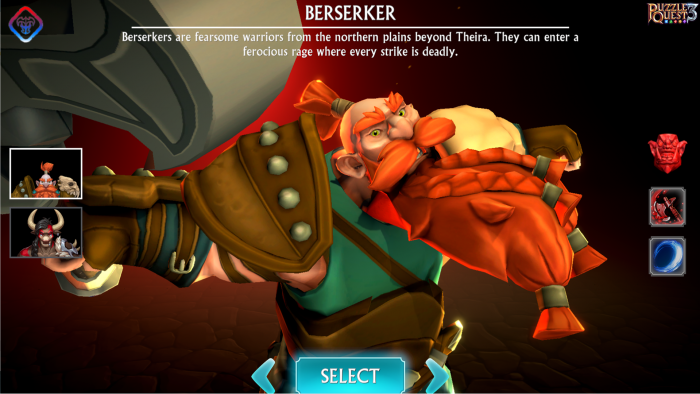 As mentioned in our last entry, each class in Puzzle Quest 3 is given three different starting spells. Two normal spells and a single Ultimate Spell. These spells showcase the unique abilities of each chosen class.

The Berserker specializes in increasing its physical power and then dealing high amounts of damage with both spells and weapons. You’ll see below how those traits are reflected.

Split Skulls deals damage directly to your opponent while at the same time creating either red gems or skull gems on the board. The skulls are very helpful for the Berserker’s second starting magical ability, Spin Attack.

Spin Attack is another direct damage spell that allows you to destroy gems around a selected gem. It also increases its attack damage when any skull gems around the selected gem are destroyed.

Note that both spells deal melee damage, rather than elemental damage like many other hero classes. This is advantageous, because (along with any skull gems matched) it all punches directly through enemy Armor, ignoring their Resistance, and reducing their Health even faster!

This wraps up our introductory guide for what you can expect when playing the Berserker class, but of course, through your travels, you’ll find many more spells to fill your spellbook (12 for each class) – some of which will activate other special effects if Rage is active.  The Berserker is a very fun class with lots of spells to combine and deal frightening amounts of damage to your opponent.

Will you take up the mantle and embrace your inner anger?

Harness your rage and save Etheria from the darkness that has befallen it! Be sure to ready your axe and practise your battle cry as you prepare for Puzzle Quest 3!