This update unveils a brand new feature: Events! We are excited to share two Events; Daily Sieges and Event Dungeons. We also have a variety of other changes to explore; including an update to the game chat, consolidating Dungeons and Skirmishes into “Challenges” and a variety of optimizations to the game.

The game has had some new animation, effects, and polish.

In a future update, we’ll be sharing some tantalizing new puzzle gameplay environments!

We felt that the game needed some other game-modes and features to return to the outside of the story, and so – introducing Events. Events add a series of time-based activities into the game to compete for unique rewards… Fight in battles with unique “modifiers” that add a twist to the game. Collect Medals to climb Tiers in Events and earn more rewards. 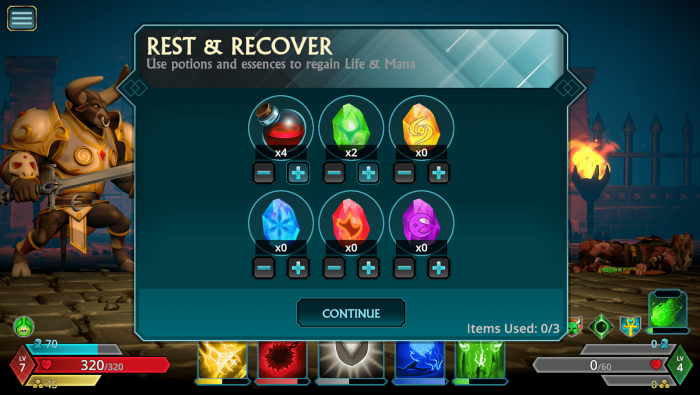 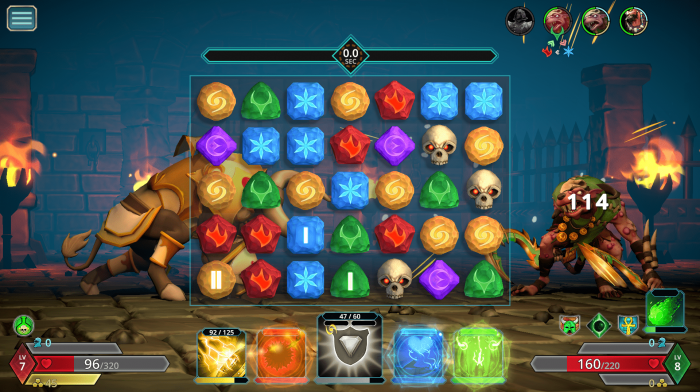 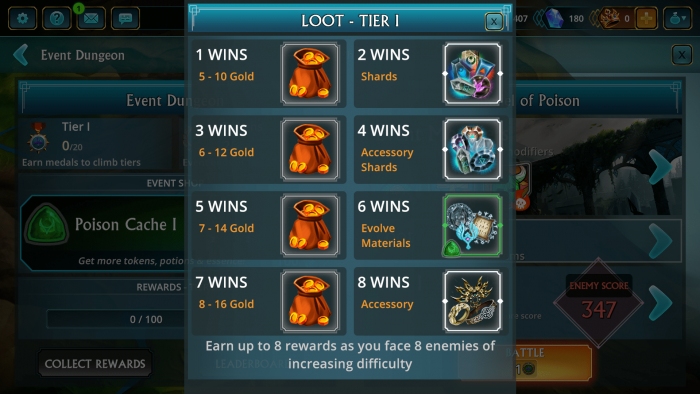 We are excited for you to enjoy the new Events in Puzzle Quest 3! The team is considering adding more Events in the future.

We have added a new type of pack to the Shop and optimized the way VIP Rewards are received.

VIP Rewards were being delivered in multiple ways. To make things simpler we’ve consolidated the rewards to be collected from inside the in-game Shop. Don’t worry – If you had uncollected rewards these will be sent via the in-game mail!

Challenges: An update to consolidate the Dungeons and Skirmishes game modes and improve the rewards.

We’ve reviewed Dungeons and Skirmishes to make them interesting and valuable to play! They have been into one menu called “Challenges” and the rewards have been changed. There is now a small chance to earn Relics. It is easier to access both game modes, select battles you want to fight, and determine the Difficulty. 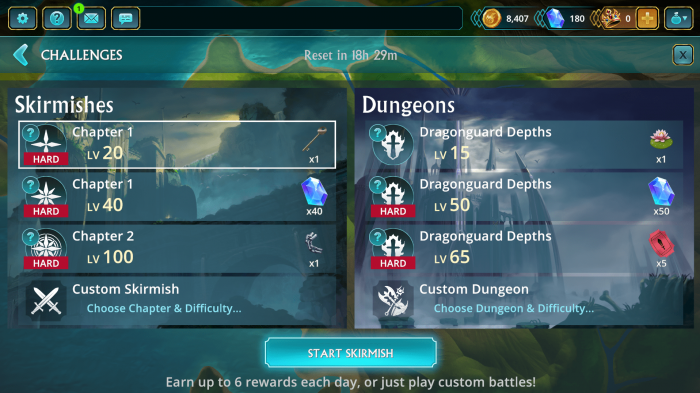 We are planning more changes to the Challenges feature in a future update to improve the menus and fine-tune the rewards.

To help you feel safe when issues arise, if you see inappropriate behavior you can now block and report other players from in-game.

We want everyone to have a positive experience playing Puzzle Quest 3. It is now possible to both block and report players. 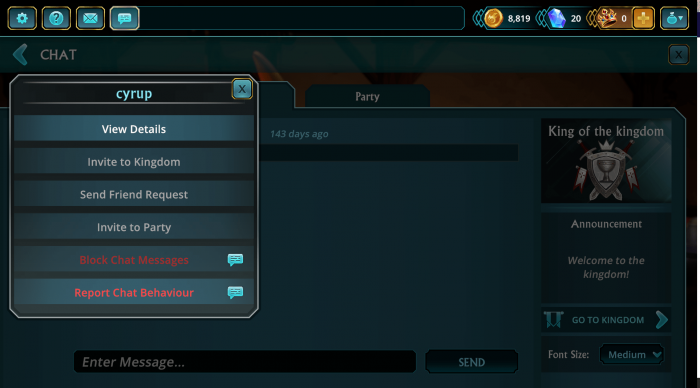 Earning Gear and Loot is an important part of the game, so we’ve taken steps to improve the menu flow when you need to open Chests and earn loot but your Vault is full.

Previously, having a full Minion, Spell, or Gear (Weapons, Armor, and Accessory) Vault meant that you couldn’t open any Chests. It’s now possible to open chests regardless of your Vault and you can ‘overflow’ your Vault until you’re ready to free up space. Don’t forget to clear some space so you can return to battle!

In the future, we are considering other ways we can improve the usability when handling Chests, such as giving you options to salvage, store or action multiple items in menus. We are open to feedback and ideas.

To keep the wider world of Etheria at balance we sometimes need to tweak a few things across the game. This means that some things might get a bit harder – and sometimes, easier.

This time we discovered both Heroes and Enemies were just a bit too overpowered with their Spells. To counter this, Items like Weapons and Gear will also give you an extra Attribute (effect) at Mythic Rarity and their statistics have changed. We’ve increased and decreased the costs of some Spells.

Unfortunately, due to the volume of changes made we are unable to list all of them here.

Changes to Collectible Items and Followers

With the help of players, we found that Upgrading Relics was very difficult, so we have made some changes that will make this easier. On the other hand, while investigating the game’s design we discovered that Followers were giving out WAY too much Food and Ore, so we’ve halved the amount they are producing to balance things in the world a little. We will continue reviewing the availability and balance of resources as we move towards worldwide launch.

We’ve added a new menu and looked at ways we can make it easier to find items and resources in Etheria.

We have created a new “Material Finder” pop-up for the Upgrade menu. This will show you where to earn Resources like certain Relics. We’ve checked some menus for clarity and wording. 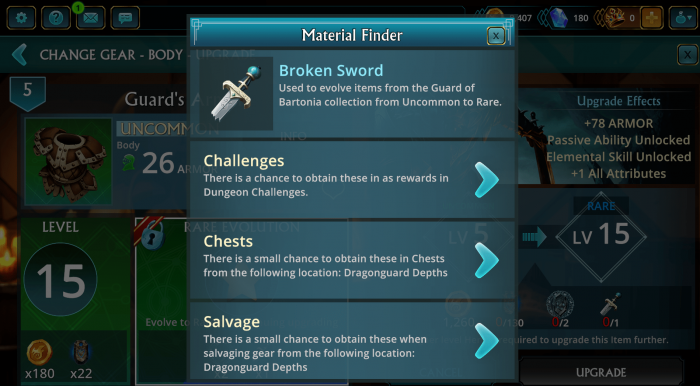 Selecting a material such as Gold or Relics while upgrading an Item or Follower will open the Material Finder, which explains how to find it in-game. If you have access to that area of the game (such as Challenges) you can select that button for it to take you there in the game.

Connect a controller to play on your mobile in Puzzle Quest 3!

Use the Settings to fine-tune your controller – try it out to control the Gems in the Puzzle Gameplay battles or maneuver through menus in the game. NOTE: Depending on your mobile device, the operating system you may not be able to use a controller in the game.

Use your controller inside the Puzzle Battle to control the board to: 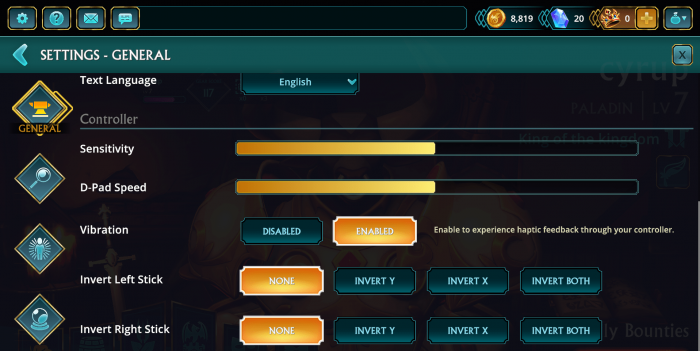 We have made gameplay optimizations to the graphic resolution and framerate to help with the performance of Puzzle Quest 3.

Adjust or decrease your Display Settings in the game to “Very Low” or “Low” to change the resolution and improve the performance of the game. Previously, some Graphics Quality Settings like Normal had poor quality graphics and the game would default to a lower resolution even if the performance was average.

Miscellaneous quality of life changes and improvements to the game.

Thank you for your ongoing suggestions and ideas on the game. We’ve addressed a number of miscellaneous issues and updated the game in small ways. Here are just some of those changes:

To contact our support team or read more information and guides on the game please visit our help center here.

We have fixed a number of issues where: